Day 12: Appomattox Court House and the Museum of the Confederacy

We had quite a long drive from the Smokies up through Tennessee, then diagonally across the state of Virginia to get to Appomattox Court House. We had originally hoped to visit Monticello as well, but given the length of the drive and the timing we opted to spend more quality time at Appomattox and not go an hour and a half out of our way to Monticello.

I did not realize that there was quite so much to Appomattox Court House National Historic Park. The small crossroads village had been turned into a sort of open air museum, with houses that replicated the scene (more or less) as it had been when Lee surrendered to Grant at the McLean farmhouse. It was nice, and a bit odd after all our time in remote areas to see a town. In all, it was done to much better effect than Harpers Ferry, which had felt frantic and jumbled and a bit commercial.

There were a few living history programs going on that day, and one of the volunteers spent quite a while orienting a group of visitors who were headed over to a program. She wanted to make very, very sure that the visitors knew that the living history reenactor wouldn't know that it's 2012, that they shouldn't ask questions about the Superbowl or modern things, that they should understand that he was stuck in 1865. It was a bit overdone; I have mixed feelings about total-immersion living history to begin with, and this reaffirmed many of them. As a theatrical performance it can provide a wonderful window into the past (ie one person shows of famous figures) but as an interactive program it can often frustrate and/or goad visitors.

The McLean farmhouse itself, though not much remains of its original structure, was definitely worth seeing. After seeing Matthews Hill at Manassas, where the war began, what seemed like weeks ago, we were now seeing the room in which it ended.
Since we had no particular interest in seeing a reconstructed town and/or living history programs (living so close, as we do, to one of the best living history museums in the world, Old Sturbridge Village) we finished fairly quickly and headed over to the Museum of the Confederacy, which we'd noticed had just opened a new building right down the street from the park in April 2012.

I have to say, I have never felt outright uncomfortable in a museum before because of its point of view. Perhaps I've been naive until this moment, but I felt that the museum portrayed the Civil War from a bias that was so far from my own beliefs about the conflict that it was nearly hostile.

It had wonderful collections, and some really engaging exhibits, but the story was decidedly Lost Cause, rather than Preserve the Union. There seemed little attempt to present both sides. Rather, words like "honor" and "romance" were used non-ironically to describe the actions of generals. I have been trying to remember if I noticed any mention at all of slavery. I don't think I did. There may  have been one or two side mentions, but nothing substantive. 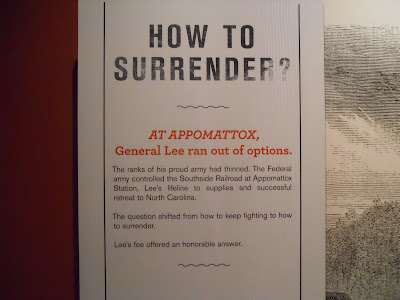 In case you can't read it, here is the description of Appomattox and the Confederate decision to surrender:

At Appomattox, General Lee ran out of options.

The ranks of his proud army had thinned. The Federal army controlled the Southside Railroad at Appomattox Station, Lee's lifeline to supplies and successful retreat to North Carolina.

The question shifted from how to keep fighting to how to surrender.

The exhibits continued on to describe Grant's offering of parole at Appomattox. I'm not sure Grant's decision had much to do with honor, more with practicality. Nothing in this label is wrong. In fact, I think it's a pretty good example of label writing: succinct, descriptive, informative. I just find it a bit uncomfortable to use words like "proud" and "honorable" in this context. Is it just because my point of view is being challenged? Is there actually a troubling characterization here? I've thought about this for some time, and I'm still not sure.