Where are they now?: Three approaches

One thing that I always appreciated at the various battlefields and museums we visited was when sites told us what happened after the fact for the individuals they talked about in their exhibits or videos. During the trip, we saw three different ways to do that, each of them effective for different reasons.

The first was at Shiloh, whose orientation video was far and away the best that we saw during the entire trip. It integrated first person stories - focusing on specific individuals during the battle - with broader narrative seamlessly, had just the right amount of excitement and seriousness, and was well-edited and well-filmed besides.

After the video but before the credits, each "character" from the film, from Ulysses S. Grant on down to couriers and privates, was given a short biographical slide with a photograph from later in life and a text description of where they went in life. It was great to see, for example, that the young Confederate courier we saw in the film survived the war and returned to the battlefield to help establish it as a National Park many years later. I thought that this style was an effective way of bringing out a personal story and then sharing its ending without lecturing or spending too much time.

The second was at the Museum of the Confederacy in Appomattox, Virginia. It featured two different "continuation" sections, one focused on soldiers, and one focused on civilians. These two sections were in different parts of the exhibit space; the first was in the midst of the space telling about the army and fighting of the war, and the second in the war's aftermath section.

This method had the benefit of being interactive, and of allowing the visitor a choice as to which soldier or civilian to learn more about. One major problem, however, was that the panels didn't stay turned. They were difficult to turn over in the first place, and unless you held them down, they would snap right back to their top photograph very quickly. This discouraged me after reading two or three stories.

The last way of sharing stories was at the Chancellorsville Visitors Center. It was a small space, with generally outdated exhibits; it looked to my eye as if this particular section was a much more recent installation. It wrapped around an interior U-shaped wall of the entire exhibit space. No matter where you were in the space, one of your walls (to your left or behind you) was covered with stories. 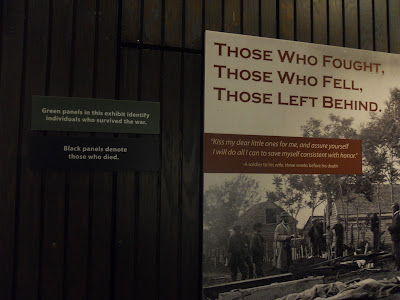 In case you can't read the small label that began the exhibit, it explains: "Green panels in this exhibit identify individuals who survived the war. Black panels denote those who died." 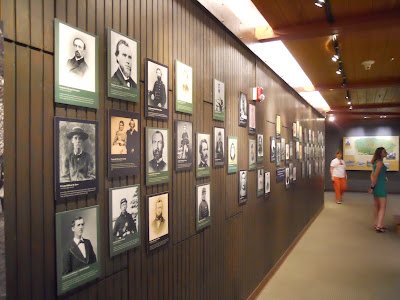 I loved this approach. Several things about it were simple and yet effective.

First, the background color was subtle yet immediately obvious. Choosing a dark green instead of a bolder color meant that you could pick up quickly the information they wanted to convey, but your eye wasn't constantly drawn to the bright colors instead of the black colors. Standing at one end, or stepping back, gave an immediate overall sense of the horrors of war - there were so many black panels.

Second, soldiers and civilians were side by side. Each person had a short story to tell, and the text captured it succinctly. Putting everyone in together emphasized the point that any war, and especially a civil war, takes a terrible toll on a country's civilian population in addition to its soldiers.

Third, it continued throughout the entire gallery. No matter what you were learning about, you had a reference point and a consistent source of interesting information that grounded all the broader exhibits about corps organization and medical care.

Fourth, I even like the somewhat random scattering of these signs. No long, straight line, but a natural jumbling up that allows the eye to move from one panel to the next with interest.

Has anyone ever seen a "where are they now?" installation done? What do you believe are the most effective techniques for doing so?
Posted by Amanda at 12:00 PM