Another early day as we headed to Manassas Battlefield National Park for its opening. The visitor center there has the tricky task of interpreting two very different battles at different times. We watched an excellent introductory video, which used the stories of several individuals to map out the broader battles – most notably Sullivan Ballou, made famous by the Ken Burns documentary. An especially neat trick was the use of pertinent artifacts from the exhibits in the film itself as part of the stories of the individuals caught up in the battle. For example, when I looked at the exhibits, I recognized a fan used by Judith Henry in the film, and the VMI cadet's coat worn by Charles Norris. The video had already done a good job of humanizing a big story, but the actual connections I discovered when visiting the galleries really drove the point home.

The Park Ranger at the site was incredible, and looked up Richard's regimental information for me while we were in the video, and then presented me with photocopies of a good, succinct description of the Twelfth's movements. We took that information on a self-guided auto tour of the battlefield. For whatever reason, I found the self-guided tour to be much easier to follow than the prescribed recorded audio tour of Gettysburg, and as a result, made much better connections with this battlefield.


The two best sites for Richard were Bawner's Farm, where is regiment arrived early in the fighting, and came under an artillery barrage that signaled the beginning of the battle. On Day 2, while Martin Hardin was commanding the brigade, the Twelfth wheeled up under his orders onto Chinn Ridge, in support of the 5th and 10th New York (who had suffered heavy casualties) who were facing down the recently-arrived Longstreet in an attempt to hold the Union right flank.
Pet peeve: the NPS literature at Gettysburg held to the typical parlance, in describing flanks as the armies themselves would have. The NPS literature at Manassas used left and right flank as if they were stage left and stage right. An observer standing behind Union lines would have described the Twelfth's position as the extreme right of the line; however, the NPS described the flank as the extreme left flank, as if an observer were standing behind the Confederate lines and looking at the front of the Union lines. It took me longer than it should have to realize the discrepancy. Perhaps there should be some kind of overall QA in the way battles are talked about?
Our next stop was Antietam, which I had visited before many years ago but didn't remember very well. We arrived in time for a firing demonstration, and listened to an explanation of loading a Napoleon gun, then saw it fired. Watching all the steps involved gave me a good understanding of the incredible pressure of moving and firing artillery quickly: there were so many small things to get right.

After the firing demonstration, we listened to a ranger interpretation of the battle while sitting in the observation deck atop the visitor center. The interpretation of Antietam has one major plus going for it: the battle took place on one day, and over a relatively small piece of ground. From the vantage point of the observation deck, the park ranger could easily point left and right and show us where troops attacked and counter-attacked.

The ranger staff at Antietam went above and beyond to help me find out where the 12th Pennsylvania fought, pulling a paper file on the regiment and walking me through a series of topographical maps. Apparently soon after the war, the US government tracked down veterans and did extensive interviews in order to figure out exactly what regiments were where – and at what times. So for the 12th, they were able to show me a series of maps labeled 5:30 a.m., 6:30 a.m., 6:45 a.m., 7:20 a.m., and so forth.

The 12th Pennsylvania was with Meade's division, which was part of the earliest fighting of the day. They went back and forth across the cornfield with Hood's Texans, and after the regiment had been shredded – Hardin's history (though he was not in command at the time, having been wounded at Second Bull Run; Richard was) records ?? casualties – they fell back to a protected copse of woods along the Warrenton Pike at the edge of the cornfield. The ranger was able to tell us what to look for when we went up there, and said that we would instantly see why the 12th as well as several other regiments took shelter in that area.

We headed off for the shortened version of the driving tour, and passed that copse on our way up – we were able to immediately see why someone would take shelter there. It was protected and shaded and immediately looked like a good place to hole up.
We continued in a loop around the corn field, starting at the top where they started and then heading around to the lower road, about as far as they reached . It wasn't a lot of space, and there is still a cornfield there, which really gave a good idea of precisely what the ground had looked like. 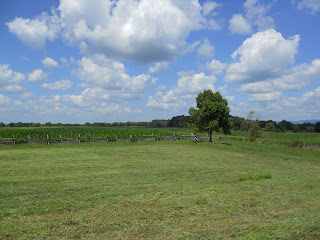 Next, we headed down to the Sunken Road, which is less than impressive from a distance and then almost instantly overwhelming as soon as you walk up to it. It looks like the perfect place to fight from as long as you hold its ends, and then a death trap once you lose that flank, which was precisely what happened.
Finally, we looped around to the Burnside Bridge, which unlike the Stone Bridge at Bull Run, is still the original structure. We found what might be my favorite monument of the trip so far on the edge of the parking lot: a huge memorial to William McKinley, obviously built just after his assassination in 1901, which testified that as a young man, while serving as a sergeant with the commissary of an Ohio volunteer regiment, he delivered hot coffee and warm food to soldiers holding the bridge and in doing so came under fire. Thus proving that military men then as now really, really appreciate their hot coffee.
Last on the docket was Harpers Ferry. The visitor center was set a bit away from the town itself, and we parked and boarded a shuttle bus. The town itself was...interesting. The Park Service had taken over the lower portion of it and turned old buildings into various museums and semi-living history shops – you were never quite sure what you would get on opening a door. We walked about a bit and saw the spot where the armory had been, and the fire house where Brown and his remaining men and hostages holed up.

We also walked through the John Brown Museum and saw a series of films that were quite good about Brown and the raid. Though I had forgotten my camera battery in the car and couldn't take pictures, one thing I especially liked about the films was that each was presented differently. The first – describing his life before the raid – was set in a mock church, with pews for visitor seating and artifacts from Kansas surrounding the space. The second was on crates of weapons, and the third was meant to mimic a court room. It was a really nice grace note, turning what could have been a generic experience into something that highlighted the story of the museum itself.